Pictures of Novitiate and Garden for September 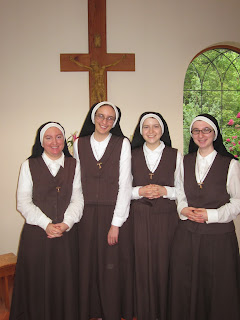 Before these pictures are out of date, I had better get them on-line!  Here it our crew of postulants who are soon to lose one member to the novitiate. 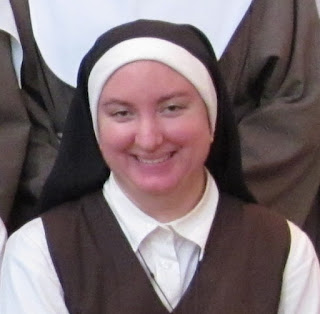 Postulant Phoenix will be clothed in the Holy Habit of our Mother St. Clare this Friday!  Stay tuned for pictures of that blessed event to come! 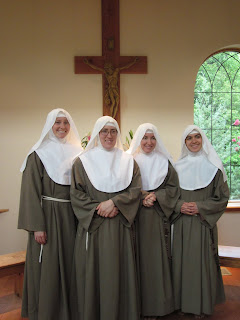 And here is our current novice crew, soon to gain one member, but due on November 21st, feast of the Presentation of Mary, to lose another to the juniorate.... 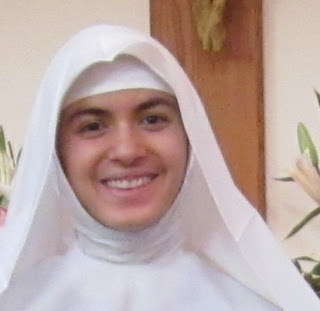 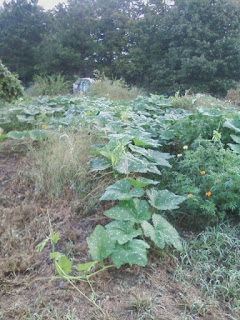 Meanwhile, out in the garden, an amazing thing!  I was about to pull up this winter squash vine since it is September and that is what you usually do at this time of year.  But all of a sudden it took on new life.  Now it is taking over the grass that in its turn has taken over the empty spots of the veggie field.  Large fruits have been spotted last week, so...Where there is life there is hope!  May it be so for the seemingly dead and dying areas of the Church!  May we witness a new springtime, even in the approaching winter.  It is our job to pray and sacrifice to that end.
Posted by Ester Regina at 8:29 AM 2 comments: 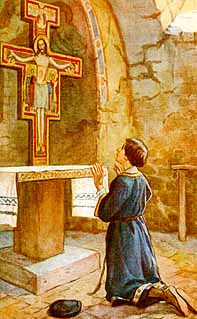 When young Francis de Pietro de Bernadone was discerning his vocation, he felt inspired to enter the dilapidated old Church of San Damiano to pray.  While kneeling before the Byzantine crucifix hanging there, it suddenly came alive for him and spoke, “Francis, go repair my house which as you see, is falling into ruin.”  As he was a simple man, Francis sold some merchandise from his father’s fabric shop and offered the money to the resident priest for the repair of the church. 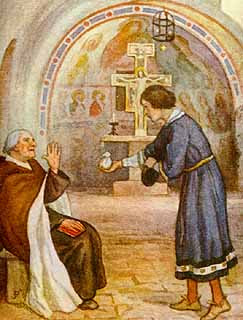 But fearing he was being mocked, the priest refused.

Then Francis became a construction contractor, and stone mason although he knew nothing about these trades.

Where there is a will, there is a way—especially for Francis of Assisi.  But after he had repaired three old churches around the countryside and had also attracted followers in his new style of life, he came to realize that Christ’s words to him had a deeper meaning.  He was called to repair not physical churches, but THE Church which through the corruption of wealth and the abuse of power, was threatening to collapse.  The reigning Pope also had a dream in which he saw St. John Lateran basilica toppling over and a small man rushing forward to prop it up with his shoulder.  When Francis arrived at the Vatican to get approval for his newly founder Order, the Pope recognized him as the man of his dream.


The first church Francis repaired, San Damiano, became the first monastery of his “Poor Ladies” who are now known as the Poor Clares.  While Francis’ brothers, the Friars Minor, uphold the Church through their imitation of the life of Christ, we his sisters, do our part as Mary did, by a maternal and prayerful presence.  The Church of the 21st century is much like that of Francis’ 13th century.  Then, as now, there were immoral priests, negligent and power hungry bishops, scandalized laity.  Christ is crucified again in the victims of abuse and we stand at the foot of His cross with Mary, compassionating Him, comforting the suffering laity gathered there and supporting those priests who, like St. John, remain faithful. 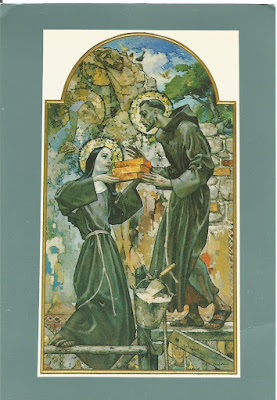 During this last week I have often wondered if we should be building an ark rather than a dormitory!  But then I was reminded that in ancient days, monasteries were built according to the dimensions given by God to Noah in Genesis.  The idea was that monasteries were indeed arks in which the life of prayer and penance offered a safe haven from the floods of chaos in the world.  So, as we build our dormitory to shelter young women seeking to live that very life of prayer and penance which offers salvation to the world through Christ, we actually are building an ark as well!  Let us continue to hope for God’s mercy, even as we anticipate his coming judgement upon us.

Posted by Ester Regina at 8:28 AM No comments: