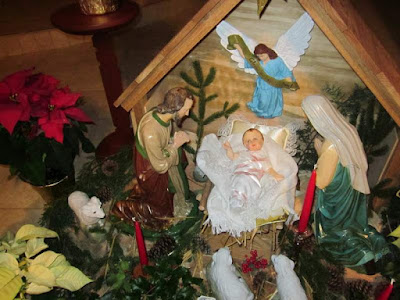 Happy Feast of the Holy Family!  I found a way to reduce the size of our photos so that they do not use up our data usage as fast when I upload them.  So, I can share with you all more scenes of Christmas at Bethlehem Monastery!  Here is our Choir Crib. 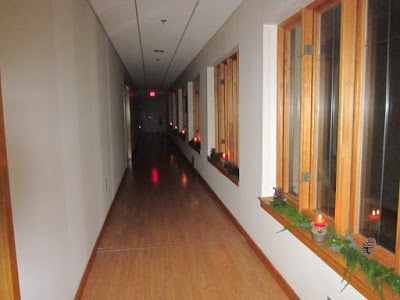 I took this shot on my way to Midnight Mass.

Our Choir Sanctuary all prepared for Christmas. 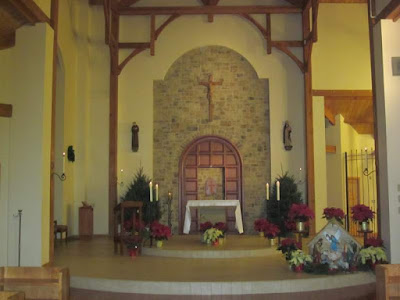 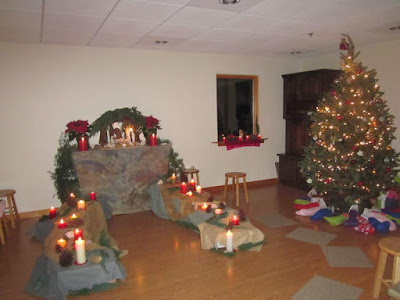 After Midnight Mass, we visit the Community Room creche. 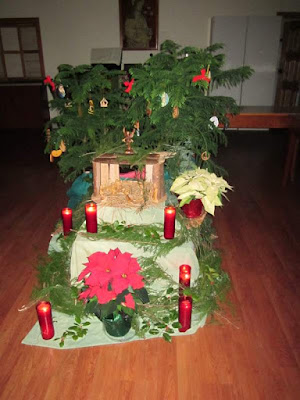 Looking into the refectory. 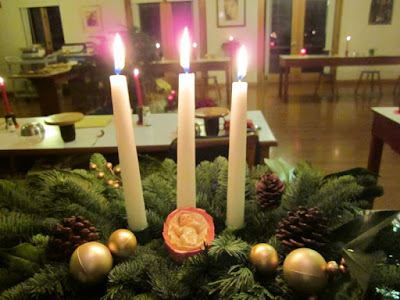 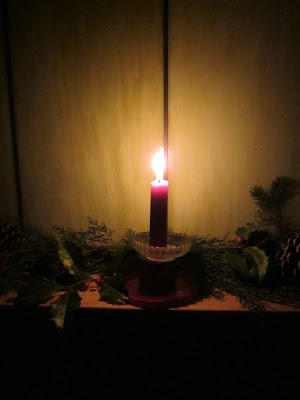 Whatever darkness your family may be experiencing this Christmas,
may the Light which is Christ shine and give you hope and joy
Posted by Ester Regina at 7:32 AM No comments:

Four Candles now burn on our Advent Wreath.  Christmas is almost here!  All of you are in our prayers as we make our final preparations for the birth of Christ.  Blessed Christmas to one and all from your Poor Clares at Bethlehem Monastery!

Into my circling interlace of days,
Come, O Child!
See my gathered years
Stretch up to you
On wicks of yearning
Spirit-kindled
In cry the Father always hears.

Wonder lurks in shadows
Too bright for eye’s bearing.
The Light is coming!

Candles count down
Intervening hours
Till Your complete possessing
Turn them to stars
And the Night breaks
Into song.

Posted by Ester Regina at 7:17 AM No comments:

Solemnity of Our Lady of Guadalupe 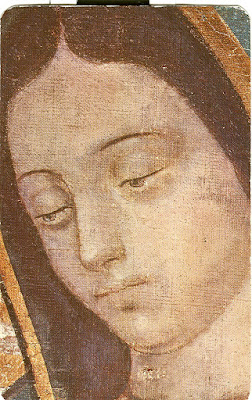 The apparition of our Lady of Guadalupe is my favorite among the appearances of Mary in our poor world after her Assumption into heavenly glory.  In every way she is the exemplar of maternal and maidenly beauty, “the highest honor of our race” particularly of the feminine variety.  Her words are poetry accompanied by bird song; she is clothed in the garments of the dawn.  Her presence radiates a transforming light that makes the barren rocks blossom with roses, a miraculous springtime in winter.  She speaks with a queenly courtesy and a motherly tenderness to a simple Indian peasant.
The image of herself that she left on that Indian’s cloak was instrumental in converting millions of his Aztec compatriots.  We are honored to claim her as the special patroness of our monastic church and it is our prayer that we who live in her house may become more like her each day.  It is the Poor Clare’s vocation to be other “Mary’s” in the Church, bringing forth Christ in the souls of men and women through our liturgical and private prayer and nurturing that life through our dedication to beauty, truth and goodness.
Dostoyevsky once wrote that “Beauty will save the world”.  It certainly was true for the New World in the 16th century.  Through the intercession of Our Lady of Guadalupe, may all her children be renewed in hope by her God-given loveliness and seek to spread her message of divine mercy to all who suffer in the darkness and ugliness of sin.

St. Nicholas did arrive last week, despite the fact that some of us were still under the weather.  Blessed Guadete (Rejoice) Sunday to one and all!
Posted by Ester Regina at 3:30 AM No comments:

Email ThisBlogThis!Share to TwitterShare to FacebookShare to Pinterest
Labels: Our Blessed Mother

One of the consequences of cloistered life is that we are not only shielded from unwanted worldly distractions, but also from undesirable biological germs.  This blessed condition creates a strengthening of the spirit, but at the same time a certain weakening of the immune system.  And so, when a cold or flu “bug” manages to invade the enclosure, we are particularly vulnerable.  Two weeks ago, an unnamed Monsignor from an unnamed nearby parish put us all on the alert as he entered our sanctuary with a suspicious cough and gravelly voice.  It was inevitable.  After the four day incubation period, we began to fall victim to various manifestations of the plague.  I succumbed early on, but fought bravely with the weapons of modern medications and extra sleep.  I, for one, remember the days before cold medications and I continually offered prayers of thanksgiving for such things that allow me to breathe through the crises.
We were all on our feet by Friday, the well having taken care of the ill, but then one of our elders did not appear for morning prayer and it was reported she was down with a particularly bad form of “the bug”.  So Mother Abbess had to call St. Nicholas to reschedule his visit for next week.  Those of his helpers who were not quite finished with their projects got a reprieve, and all of us still have the anticipation of our gifts to keep us going until “Holy Man” finally arrives.  Sister was seen at Mass this morning, so there is hope!  Pray for her and the rest of us, that no one else becomes afflicted.
Meanwhile, we also anticipate the opening of the Year of Mercy, proclaimed by our Holy Father.  May we all entrust ourselves to God’s merciful love that was manifested in an extraordinary way in the Immaculate Conception of His Mother.  Blessed Advent journey to all!